Also a success for BARO-Training!

The ski star from France relies on regeneration with BARO-Training.

The overall winner of the Ski World Cup 2020/21 and also the winner of the small crystal ball for the overall victory in giant slalom had already integrated the BARO-Training into his daily training program in the 2019/20 season.

Our BARO-Mobil accompanied him to the World Cup stations all over Europe and enabled him to do regeneration training on competition days and between runs.

The tension shortly before his victorious run in the giant slalom at the season finale in Lenzer Heide was great, but the relief and joy was even greater when he swung down at the finish two minutes later and his dream came true exactly on his 30th birthday.

After a perfect and controlled run on the already battered slope, what he had worked hard for years and what was denied to him in the preseason due to the early termination of the World Cup winter due to the Corona was finally done!

We congratulate once again, thank him for the great cooperation and look forward to a new season with Alexis and the BARO-Trainer! 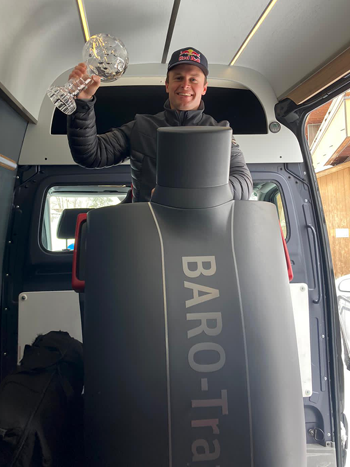 <– Back to the overview